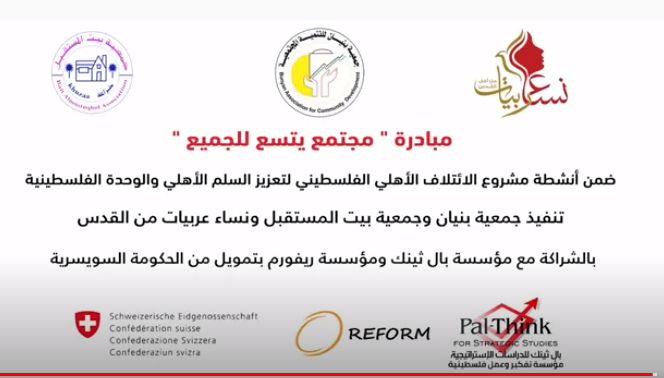 Bonyan, Bait AlMostuqbul, and Arab Women for Jerusalem associations conclude community for all initiative’s activities, which was implemented within the activities of the Palestinian National Coalition project to promote civil peace and national unity. It was carried out by Pal-Think and REFORM organizations. Besides, it was funded by the Swiss government.

This initiative was a joint work between two associations from the Gaza Strip which are Bonyan and Bait AlMostuqbul associations, plus another association from Jerusalem which is Arab Women for Jerusalem. This joint work is considered as one of the project objectives which is implemented by Pal-think for many years to enhance national unity, joint collaboration between different Palestinian organizations.

The initiative aimed to introduce the coalition that was formed from various institutions in all governorates of the Gaza Strip, West Bank, and Jerusalem, represented by popular pressure on decision-makers to end the Palestinian internal conflict, rebuild the  Palestinian national unity, and disseminate the culture of civil peace in Palestinian society.

The activities of the initiative included filming and producing a short film explaining the community’s desire to end the Palestinian internal conflict as a result of its severe negative consequences that have affected all people in the society. The film was pictured as interviews with some community figures including journalists, legal activists, and managers of NGOs in the Gaza Strip, the West Bank, and Jerusalem.

If you want to watch the full video, here is the link https://www.youtube.com/watch?v=vDiKXlRwcfc&feature=youtu.be

This research paper recommended that comprehensive national unity means involving all Palestinians in reconciliation and strengthening the partnership of civil society institutions with the national authority and the private sector in several areas concerned with developing and educating members of society about the relationship of their belonging to their homeland, which drives them towards economic and sustainable development and community reconciliation.

Moreover, a Facebook page, the Future Makers platform, was created. This page will serve as a platform for all groups of society, including institutions, youth, and women, to express their opinions and put pressure on the parties who are responsible for the reconciliation file.