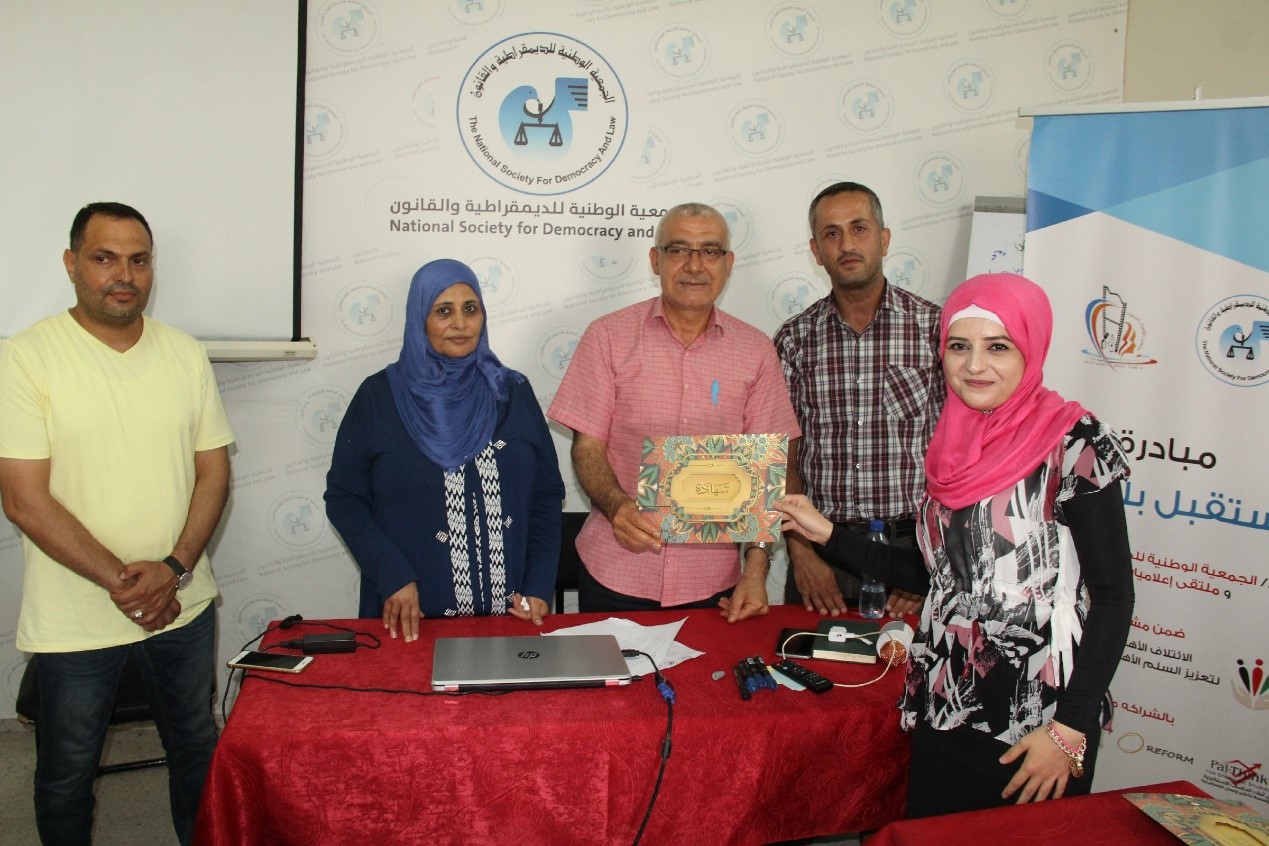 The National Society for Democracy and Law, NSDL, cooperated with the South Women Media Forum and concluded the "future without violence" initiative within the project of "Palestinian National Coalition for the Promotion of Civil Peace and National Unity. This program was carried out in partnership with Pal-Think for Strategic Studies and REFORM organizations by the fund of the Swiss Government.

This initiative comes to contribute to disseminating and strengthening the concepts of civil peace, tolerance, the principles of effective dialog in the Palestinian society. Besides, renouncing all forms of violence that were participated in society.

The objectives of this initiative are achieved through the development of youth abilities, especially those who work in media and law by promoting their awareness. Plus, disseminating a culture of civil peace in the Palestinian society through social media, radio channels, and consultation meetings to reject violence and to maintain the entity and stability of society.

The South Women Media Forum has carried out several activities, including lobbying and advocacy on social media (Facebook and Twitter) on the need to promote and consolidate civil peace in society, which has been used the #peace_protection hashtag.

Many people participated in this campaign including community representatives, social media, and media activists. In addition, two short films about strengthening the concepts of civil peace, tolerance, and national unity have been produced to sensitize people, especially the media, to the need to disseminate these concepts and to stop intolerance in all its forms.

Moreover, a 60-minute ZOOM meeting with participants who work in media, human rights, and civil society.  Plus, a research paper prepared by the NSDL was reviewed and discussed in the ZOOM meeting.

As well as, two radio episodes were broadcast on the role of legal and media institutions in promoting concepts of civil peace and national unity. Besides, a serious discussion held about critical social phenomena such as murder, tribal, and party intolerance. Plus, Fatah and Hamas conflict and its dangerous consequences on both the state and society. Also, the tasks of media and legal institutions to renounce violence and protect civil peace.

People who are responsible for the implementation of the initiative recommended that the role of the media should be strengthened by building partnerships and cooperation with civil society institutions to launch other initiatives that promote the concepts of civil peace, the culture of dialog and tolerance in Palestinian society.

It worth saying that this kind of initiative would also put pressure on decision-makers and officials to enact a law criminalizing all acts that incite violence, encourage young people to invest their role in society, and make them aware of the importance of social media and its ability to help foster a culture of dialog and tolerance, renounce violence and hatred to preserve society. It is also necessary to hold the civil and governmental institutions objective and professional in their work away from partisan and communal intolerance.